This article was originally published at ComicBook.Com on September 15, 2016. 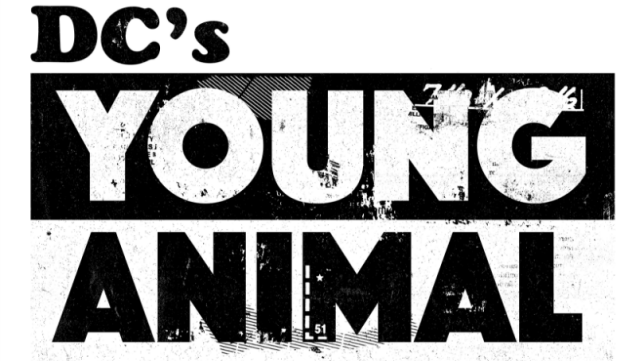 This week sees the official launch of DC Comics’ Young Animal imprint with the publication of Doom Patrol #1. The imprint was first announced in April of this year at Emerald City Comicon. Young Animal is designed to give a different spin to characters in the DC Universe, some pre-existing and some new. What was most surprising about the initial announcement was the introduction of Gerard Way, co-creator of The Umbrella Academy and My Chemical Romance vocalist, as the leading man behind the effort. It was an announcement with lots of promise and now it is almost here.

Young Animal is launching with a total of four series throughout fall of 2016 to start. Each series features new takes on lesser known characters (e.g. Shade and Cave Carson) or brand new ones. Doom Patrol #1 will be written by Way himself and drawn by Nick Derington. Way described his take on the Doom Patrol as a spiritual successor to Grant Morrison’s beloved run from the late 80s and early 90s. It’s this connection that is most revealing about the potential and direction found in Young Animal.

Morrison’s Doom Patrol was published alongside a pantheon of iconic characters that fit easily into the superhero mold at DC Comics. It was a mold that the Doom Patrol not only refused, but attempted to break. Confrontations with bizarre foes like the Brotherhood of Dada and Scissor Men along with the inclusion of new characters like the transgendered Danny the Street (who was a literal street) paved new roads in the genre. More significantly, Doom Patrol was not alone in its oddities and tangents at DC Comics during this time.

Around the same period DC Comics also published the likes of Animal Man (also by Morrison), Saga of the Swamp Thing, Hellblazer, and Sandman. These are all now considered to be Vertigo Comics titles, but they were only included into that imprint after it was founded by Karen Berger in 1993. In many ways it was a response to these very successful comics that didn’t quite fit into the mainstream DC Comics superhero umbrella. Rather than attempt to have these comics conform or crossover, the publisher allowed them to keep doing their own, very unique, thing.
That seems to be the idea with Young Animal. This becomes even more clear when examining the recent lineup of Rebirth comics published over the past few months. DC Comics has gone back to its roots with Rebirth, publishing a wide array of superhero comics focused on essentials with quick turnarounds, exciting stories, and great talent. Even the new Hellblazer series fits shockingly well into the bounds of a standard superhero story. None of this is a bad thing either. The Rebirth comics are consistently a lot of fun and include some really great talents. They aren’t experimenting with the form or genre though; that seems to be the goal with Young Animal instead.

This becomes even more clear when you review the concepts of the first four series:

Morrison’s Doom Patrol defined itself by having both the strangest heroes and villains, and this series is set to do the same. The tropes may feel familiar, but the way these characters interact with their world is anything but. It’s a superhero story taken to the furthest reaches of imagination to explore both the genre and how individuals who feel like they have no place in the world manage to fit in.

Pulling from Steve Ditko’s original creation and the Vertigo series written by Peter Milligan, this new take on Shade follows a young woman from Meta who comes to Earth and assumes the life of a teenage girl. She has to live experiences she never counted on and become responsible for people she didn’t intend to hurt. It’s a perfect metaphor for adolescence with alienation baked into the protagonist’s very character.

CAVE CARSON HAS A CYBERNETIC EYE

Cave Carson is focused on a recently widowed middle aged man, the opposite of Marvel Studios’ handsome, aspirational heroes. Yet his experiences and unique modifications (that cybernetic eye) give him a life worth leading even in the midst of so much upheaval. Pulling from the weirdness of Golden Age adventure comics, this story is set to tackle the adventure of life in all of its many forms.

Mother Panic is the one truly new character in this initial lineup, although she can be seen as a spin on a classic one: Batman. She is a brutal vigilante by night and socialite by day operating in Gotham City. Removing the Caped Crusader’s origin allows this story to delve into what a super-rich superhero might look do, inquiring into questions of wealth and status along the way as well.

When you look at those series set to debut over the next few months starting this Wednesday, it’s difficult to not have Flashbacks of the origins of Vertigo Comics. There’s a talented array of creators pursuing discarded superhero concepts with an incredible sense of passion. The last time something like this happened at DC Comics it produced some of the best comics of the past century. Animal Man #5, “The Coyote Gospel”, still stands as a testament to the immense power of a single issue of superhero comics. Considering the similarities, it’s difficult to not have high expectations for Young Animal.

These four titles provide a diverse array of creators, styles, and stories, but they’re also the beginning of Young Animal. Based on their success, we could continue to see more C-list superheroes and new characters emerge and explore the genre in ways that are impossible to imagine now.

Young Animal also provides a home for titles that were previously squeezed into the main DC Comics publishing line. The Omega Men was one of the publisher’s worst selling comics as part of the DCYou initiative, but has hit the New York Times bestseller list as a collection. Its formalistic quirks and focus outside of standard genre fare would have made it a potential fit for Young Animal. In this line it would not have to compete with the likes of Batman and Green Lantern, but could instead be marketed towards a better suited audience with more similar titles. The same goes for an outstanding comic like Prez that never got to complete its planned 12-issue run.

2016 has seen a lot of changes at DC Comics. They’ve taken the lessons of the past five years and reworked their publishing model in a variety of exciting ways that already appear to be paying off. While the Rebirth line focuses on their core strengths, Young Animal has been devised to encourage growth and exploration. Old ideas are made new, while new ideas truly astound. Young Animal is set to redefine the superhero and reveal the most exciting talents of the next decade in comics.

The birth of Young Animal may be the most exciting thing to happen in comics in 2016, and it’s just the beginning.

Chase is a mild-mannered finance guy by day and a raving comics fan by night. He has been reading comics for more than half of his life (all 23 years of it). After graduating from the University of Nebraska–Lincoln with degrees in Economics and English, he has continued to research comics while writing articles and reviews online. His favorite superhero is Superman and he'll accept no other answers. Don't ask about his favorite comic unless you're ready to spend a day discussing dozens of different titles. View more posts